So I get some pretty interesting requests for cakes from Mini Coopers, to pirates, to pink-polka-dotted guitars.  And I have to admit I do appreciate a customer who knows what they want!  But when I got a request for a baby shower cake featuring Winnie the Pooh pulling Piglet in a wagon decked out with mud tires going through I mud puddle, I was a little skeptical!

First of all, sculpting iconic characters like Winnie the Pooh always stresses me out.  Because everyone knows what Pooh looks like, so anything missing the mark ends up looking like a distant relative of Pooh.  Like his 3rd cousin, once removed, Whiney the Poot!  It’s just really hard to get it just right.

Well Jesus must have been with me that day 😉 because my figures were spot-on!  In fact, one friend commented that at first glance she thought they were made of plastic!  After the time that guy ate a piece of my cake off the ground, this was the best compliment anyone had ever given me!  I modeled the cake after a fishing themed cake that I made several months ago.  But instead of the scene looking like a swampy pond, I made it look more like a forest meadow.  Special props go out to my dear sister Crystal who assisted me with the cake, since it was my first cake since my surgery a month ago.  She put up with me bossing her around like a champ!

The cake itself was a buttermilk vanilla cake with vanilla and chocolate buttercream frosting.  All the characters and embellishments were made from gumpaste.  For more baby shower cakes click here. 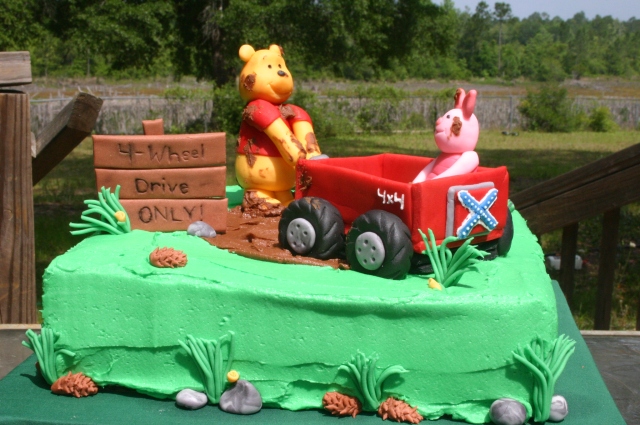 Close up of Winnie the Pooh pulling the "Muddin' Wagon"!

Close up of gumpaste Piglet in the wagon.