A local Crestview Mother called that had previously had one of my wedding cakes and requested a Yo Gaba Gaba birthday cake for her daughter Liza Grace.  Specifically, she wanted one that had a fun inside to match the crazy rainbow colors of the characters.  She had found a picture that had incorporated the boombox and the 5 main characters (Muna, Foofa, Brobee, Toodee, Plex) and asked if I could create something similar. As you can see below, it captured the essence of the show pretty well! 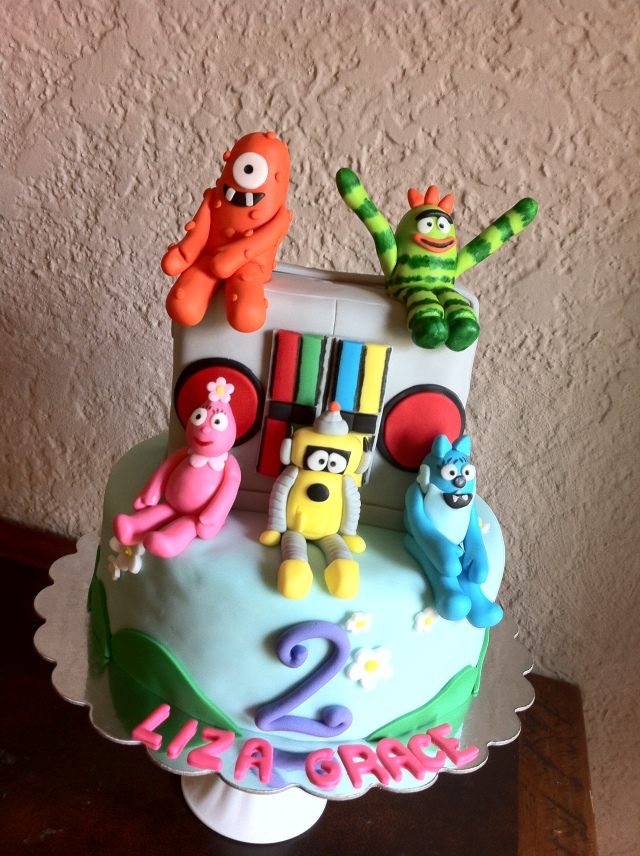 So I made a 2 tier cake with the magic boombox and the 5 characters made out of gumpaste.  I focused on making the characters as detailed as possible from the antennas on Plex’s head to Brobee’s dark green stripes. The inside was my confetti cake: buttermilk vanilla cake with Jimmy Sprinkles.I must confess Yo Gaba Gaba is my favorite kids show.  I like to watch it with my 5 yr old daughter and sing along to the AWESOME songs. Example:

Are their any kids shows that you enjoy watching even as an adult? Feel free to check out some of my other cakes with childhood themes from the books of Dr. Seuss, smartphone games like Angry Birds, & every boy’s dream of becoming a pirate.

One thought on “Yo Gaba Gaba Birthday Cake”