This is a warning.  The birthday cakes you are about to see came from the brains of babes.  They’re a little out-there, a little odd, even a little schizophrenic! 😉 But most of all these babies were CUSTOM!!!

A couple of weeks ago I met with a new friend of mine, the lovely Mrs. Kimberly Hobbs, owner of Cafe Liquid in Niceville Florida,  at [gasp] Starbucks.  We were meeting to discuss birthday cakes for both of her sons, J who’s 11 and C who’s 7, and boy-oh-boy, do these boys know what they like, well except for Mr. C– he likes EVERYTHING!!!

J was a little more organized.  He wanted to incorporate three of his favorite interests:  the University of Alabama, Tae kwon do (he has a camo belt), and reading, specifically his 3 favorite books– Lord of the Rings, How to Train Your Dragon (I didn’t realize that was a book! Lol), and The 39 Clues.  So I thought a cake with sculpted books for a base with a 2nd tier featuring Alabama and Tae kwon do would be pretty easy to accomplish without looking too crazy.  With a plan in mind for a Alabama/Tae kwon do/book enthusiast cake, I turned to hear what C wanted.

But Mr. C, he wanted a little bit of everything on his cake.  First, he also wanted to incorporate Tae kwon do (he too has a camo belt), along with Super Mario Brothers, How to Train your Dragon, and Lego Star Wars….. whew!  Oh and when his brother said University of Alabama, Little C started telling me what sports team he wanted, too!  I tried, I really did, but I couldn’t figure out how to put all that stuff on one cake without it landing me on Cake Wrecks!  So I got C to narrow it down to a figure of Toothless in Mario Land wearing a Tae kwon do belt.  And yes, I do know how crazy it sounds, but the resulting Toothless (How to Train Your Dragon)/Super Mario Brothers cake was adorable!  🙂

These boys also knew exactly what they wanted when it came to the flavors of their cakes.  Since they were both getting 2 tier cakes, they wanted a different flavor for each tier.  C wanted triple chocolate and vanilla, and J, who polled his friends LOL, wanted triple chocolate and strawberry.  Since there was an issue with red dye allergy, I made a fresh strawberry cake with a strawberry buttercream filling!  YUM!

In the end, I loved the cakes.  They were so original, and really represented each boy so well.  I hope they loved them as much as I loved making them!

The "ring" was from the book "The Lord of the Rings" 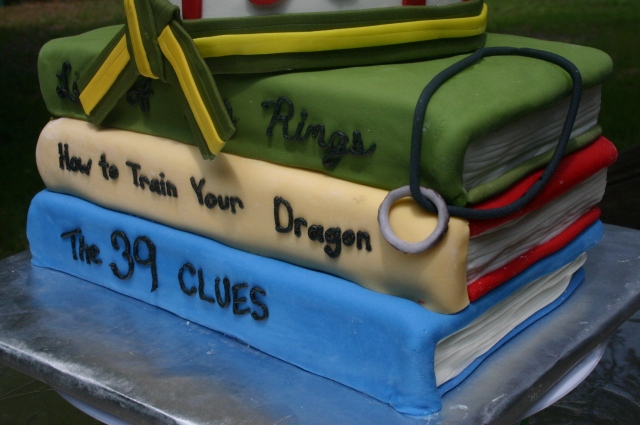 A close up of the sculpted "books"

Close up of sculpted Toothless 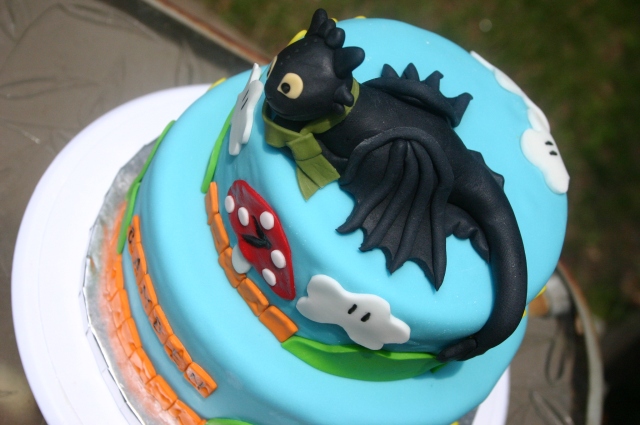 My sweet friend Kim is amazing.  She is the wonderful, supportive wife of the senior pastor of our church home in Niceville, FL.  She’s an incredibly talented musician and self proclaimed doo-wop girl 🙂  So I was thrilled to get to the opportunity to not only make her cake but also to design it.  The only instructions she gave me were to make it chocolate and have something musical on it.

I love getting to design a cake for someone, because it’s an opportunity for me to create a one-of-a-kind cake just for them.  But when I’m given complete artistic liberty, I get a little anxious.  I mean what if I pick a beautiful color palette and then find out that the person hates that color!  I like to have some kind of guidelines or inspiration to use as a springboard!  Thank goodness for Kim’s daughter Kristen for picking out a fun and funky invitation that was the perfect guide for my cake!  The invite had these great neon colored kaleidoscope-like star bursts on a black background that I just had to incorporate into my design.  So after a few tweaks here and there I came up with a sketch that I thought was perfect.

Sketch of the 50th birthday cake.

So now that I had a plan, I made a delicious triple chocolate cake with vanilla buttercream frosting and marshmallow fondant.  On the day of the party, the birthday girl said that it was the perfect cake and she said that it just screamed “Kim”! And that was the best compliment she could have given me 🙂

Close up of Kaleidoscope pattern 🙂